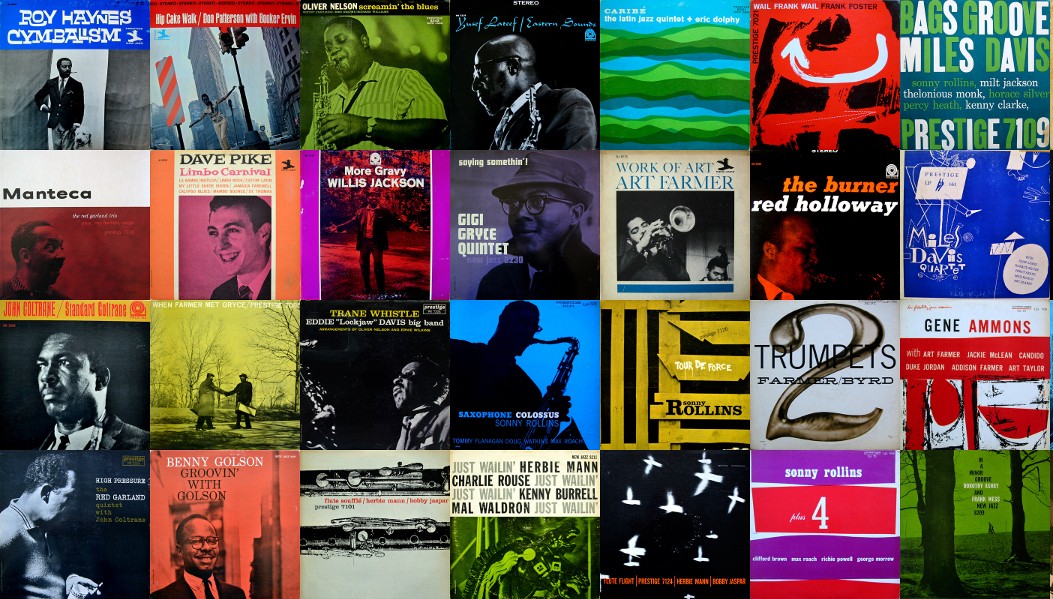 With all celebratory events concerning the 75th anniversary of Blue Note Records – reissues, tribute podcasts and birthday concerts – one would almost forget that another famous jazz label, too, is celebrating a jubilee in 2014. Prestige Records recorded its first session 65 years ago, thereby building the foundations of an impressive and important catalogue, containing landmark jazz albums by such greats as John Coltrane, Miles Davis and Sonny Rollins. Yet, the label never reached the cult status that Blue Note had and still has. Too bad, as its back catalogue holds real treasures for those who look beyond the beaten path.

The accompanying podcast is only a small selection of some of the finest moments in 65 years of jazz.

Prestige Records was born when Bob Weinstock, a then 20 year old jazz entrepreneur, recorded a session with Lennie Tristano and Lee Konitz in New York City on January 11, 1949. Weinstock has been described as a clever businessman with a good nose for new jazz talent. He quickly managed to turn Prestige into a healthy company with an interesting artist roster, as he had earlier befriended many jazz musicians in the Big Apple, who were all willing to record for his label.

When taking a look at the Prestige output – and that of its sublabel New Jazz – one immediately sees why Prestige was such an important jazz recording company. The label’s discography include records by Thelonious Monk, Miles Davis (the legendary Workin’, Cookin’, Steamin’ and Relaxin’ sessions), John Coltrane (many albums, including his debut as a leader), Sonny Rollins (his landmark Saxophone Colossus album), Gene Ammons and many more.

At the height of the modern jazz era, Bob Weinstock and Prestige were competing with Alfred Lion and his Blue Note record label. Both labels had a lot in common, from their choice for a recording engineer (audio wizard Rudy Van Gelder) or their choice of artists (both released records by Miles Davis, John Coltrane, Sonny Rollins, Jackie McLean and many more) to their art department (Blue Note’s art director Reid Miles designed some Prestige albums too). Yet, when compared to Blue Note Records, Prestige seems to be the eternal runner-up.

A much heard explanation is the difference in how Alfred Lion and Bob Weinstock approached a recording session. Lion was known to pay his musicians for rehearsals – an unseen practice in those days – and usually booked Rudy Van Gelder’s studio two days in advance so that the musicians got to know each other and the music as much as possible before the recording. Blue Note’s immense vaults of unreleased material and alternate takes prove that during the recording too, Lion was very picky about what he released and what not.

Weinstock, on the other hand, hardly ever recorded second takes, let alone have musicians rehearse before a recording session. In a 1990 interview with James Rozzi, Weinstock explained: “I found charts and rehearsals were the kiss of death. I believe jazz should be free and loose, and should swing. That’s the atmosphere I wanted to create, not the stress and strain of trying to work out some chart. […] For a certain period of time while I was supervising sessions, I had every Friday booked at Van Gelder’s studio, often without anything in particular in mind.”

It may be for that reason that Blue Note’s output has received such a cult status, while Prestige records have the reputation of being mere ‘blowing sessions’. Yet, the recordings capture some of the most important jazz musicians of their time, doing what they did best: improvising and re-inventing standards in a relaxed and artist friendly atmosphere.

An old Prestige advertisement with some of the label’s most important artists.