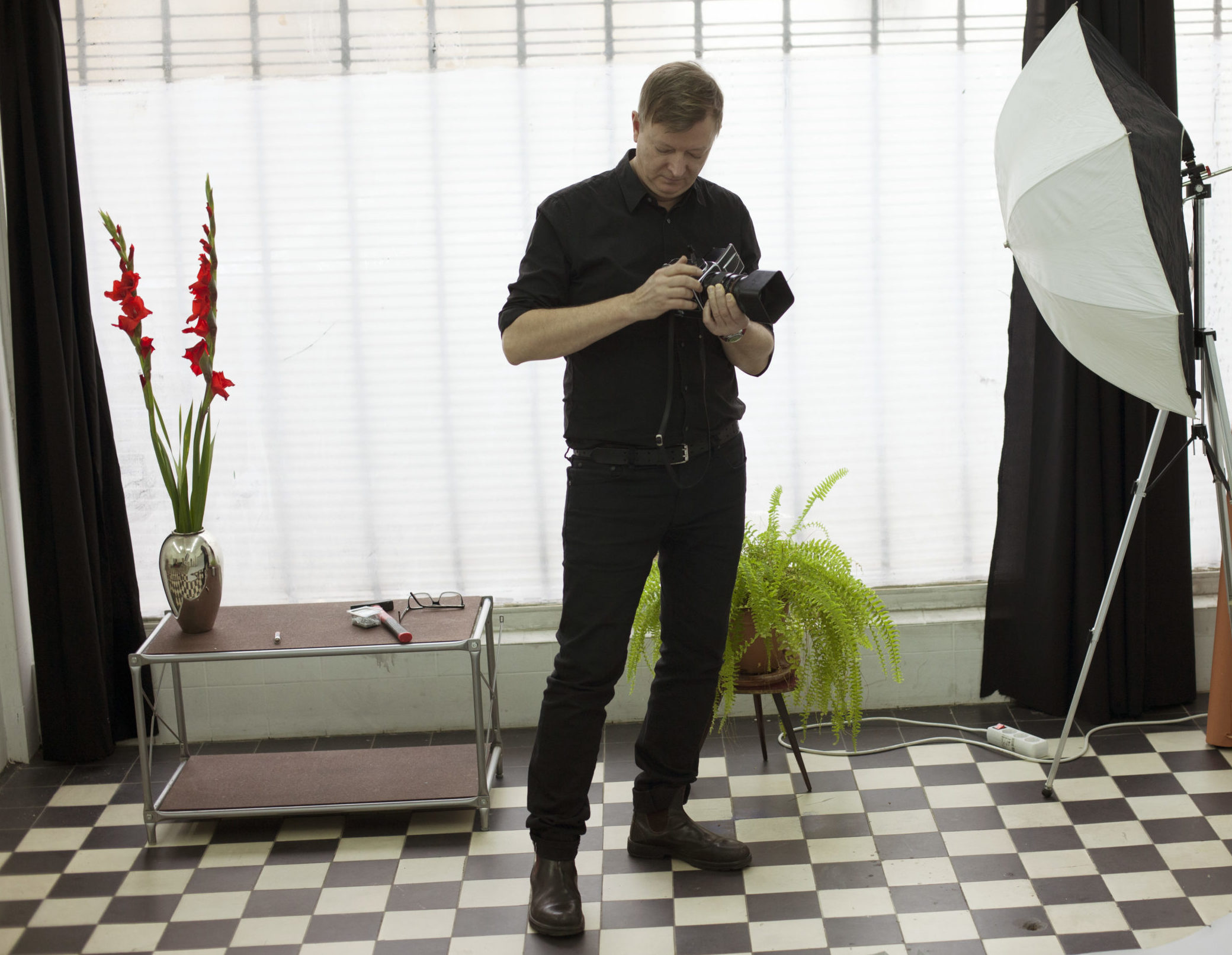 A brief 8-year stay in Berlin could only sharpen my interest in German music, present and past – as rich and tumultuous as the country’s history. Of course there is krautrock / kosmische music, electronic music, yes, but much more. By means of readings, encounters, online discoveries or “via via”: my initial interest has since extended to punk, post-punk & other “Neue Deutsche Welle” (German New Wave), to experimental music (with a.o. Raster Noton, Kashual Plastik, Mille Plateaux, Stallplaat, Syrphe, Bohemian Drips) to free-jazz, film music, the dub of Pole & co…

This commemoration made me want to offer LDBK – on the one hand a musical selection focusing on East and West German music from 1961 – 1989, and on the other hand to combine this selection with an interview with Joe Dilworth. Spiritualized, Stereolab, Th’ Faith Healers are some of the bands he has been drummer for at one time or another, and even today he officiates in Cavern Of Anti-Matter, an electro-kraut band he founded with Tim Gane from Stereolab.

The former Melody Maker photographer moved to Berlin in 2005 where, in addition to his work as a photographer, he co-founded the independent bookshop and photography gallery Bildband Berlin in 2015. He is currently working on a photo book entitled Lament for Cement.

This interview took place in Berlin at his home on the 23rd of July 2021.

– May I ask you to introduce yourself?

My name is Joe, I’m a photographer and musician from London.

– How did you decide to become a photographer?

It seemed like an art form whose language I understood and that I could add something to.

– I picked the above photo to illustrate my musical selection. Can you tell me more about it?

That picture is from my first visit to Berlin, at the Alte Wache on Unter Den Linden, at the heart of East Berlin. That is the symbol of the GDR (GDR = German Democratic Republic ndlr) behind the boy.

– Could you explain your approach for portraits of musicians and for reportages behind the iron curtain?

Of course music culture in the UK is very visual, I think because of the lack of much interesting radio and the strength of the music press. So we grew up very aware of image in music, and the photographers have to understand that and be in that culture too.

My travels in Eastern Europe were to try and push myself, to be on my own and a long way from home, to really try and concentrate purely on seeing. 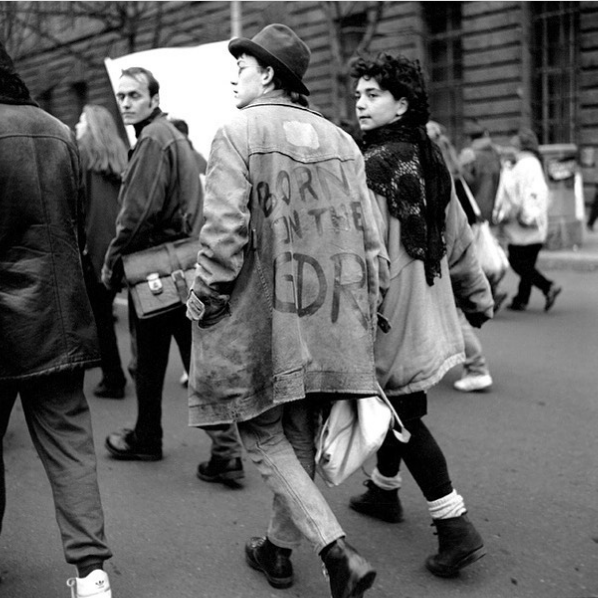 I had been going to Berlin since the mid 80’s and knew people on both sides of the wall – and by the early 2000’s the pace of change was really fast – it seemed like a different city every time I was there. A friend was moving out of her apartment, and I thought I would stay for the summer, but I’m still here.

– Could you tell us some memorable anecdotes about reportages in Eastern Europe? 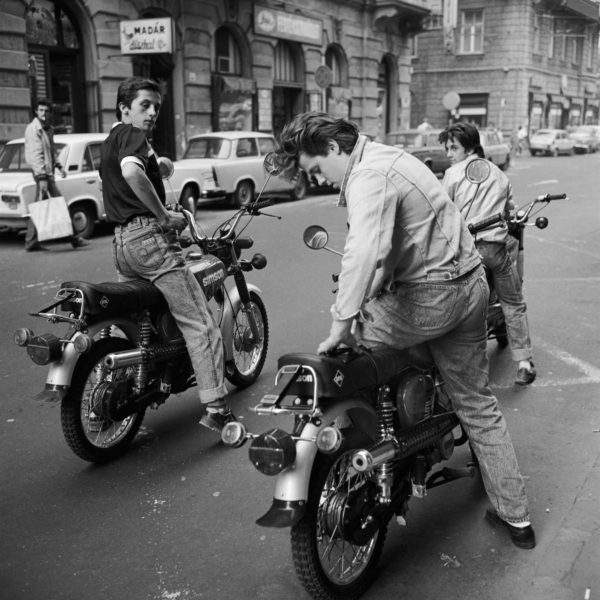 When I was in Budapest in 1989, these kids came tearing down the street on bikes and stopped just in front of me – I only managed to get one picture before they took off again. 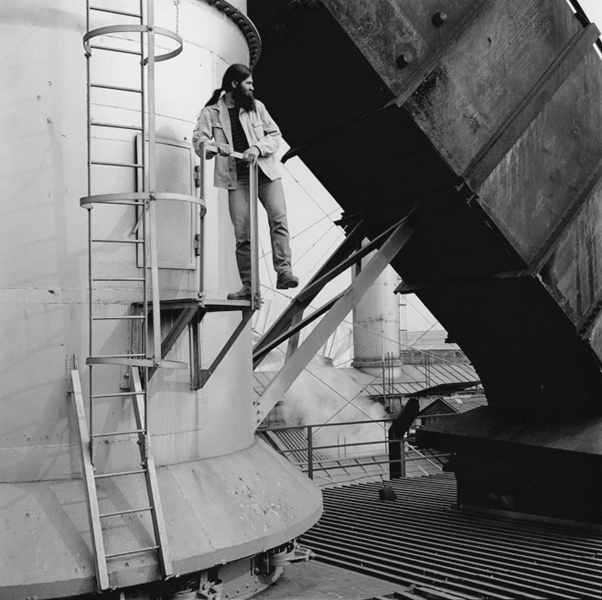 The other picture is of my friend Levin, at the factory where he was working – I borrowed someone else’s ID to show the guards at the gate to get in, it was a guarded installation. We climbed up onto the roof, where he had been repairing it, he was very much in his element.

– Which upcoming projets do you have in mind?  I read about a Book you’re working on?

Yes, I’m working on a book about Eastern Europe in the years 1989-90, hopefully it will be out in February!

– Krautrock was an influence on Stereolab’s album “Dots & Loops” – was it already an influence when you were in the band?

Yes, I still have the cassettes that Tim gave me of Silver Apples and Cluster and stuff like that from when we started Stereolab, very much an influence on us. My band before, The Faith Healers, had already covered Mother Sky by Can.

– You may have had a glimpse at one time or another of the music scene east of the Iron Curtain. Could you tell us more about it? How was it?

I went to cover a state-sponsored music festival in East Berlin and met a guy who introduced me to a lot of other people there, but within a year the wall was down and the whole landscape had changed. To be honest, it was almost impossible anyway to have access to any kind of underground event as a foreigner.

– You played in a lot of bands (24!) among which Stereolab in the beginning – a band which sampled Amon Duul, and was influenced by Neu & Kraftwerk – Cavern of Antimatter, Th’ Faith Healers, Add N to n X, Spiritualized, … and also worked at the Melody Maker. What do you think about the evolution of the music industry today?

It’s a very different situation now, but it’s always been hard to make a living from music – that hasn’t changed. Maybe it’s easier to reach more people now, and not have to go through the traditional music press.

Also, music is less linear now, not one style followed by another, because the whole history of music is available. Nowadays musicians can look back and forward at the same time. Something that bands like Stereolab have been doing since we started. 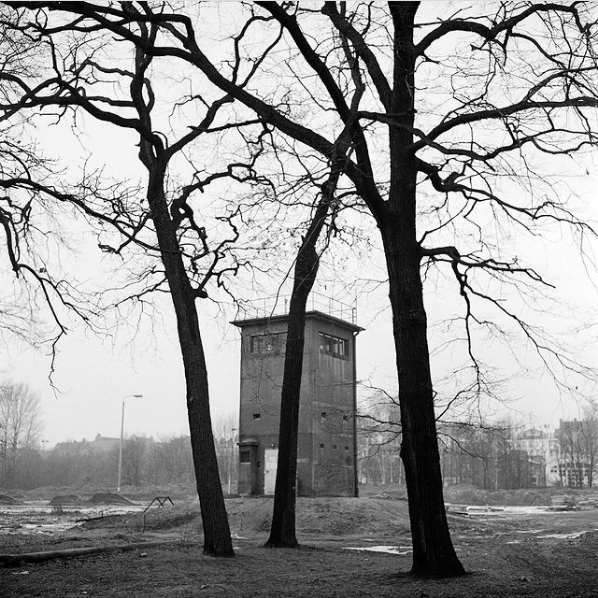 – What was your feeling when the wall came down ?

I think there was a kind of… security in knowing exactly who your enemy was. There was something about the immovableness of the East-German state meant they were to blame for everything, and you knew what to push against. And then as soon as the wall came down, for a lot of people I knew [in the East ndlr] their qualification wasn’t worth anything, the place they worked closed down suddenly,.. You wouldn’t have any time to face this. Also the art, the music scene in East-Berlin did suffer in some ways, well the homegrown one.

And for the West-Berlin side, well, all the development happened in the east. For a long time, if you went to West Berlin, it hadn’t changed at all. It just looked even poorer. A lot of people left Berlin as well at that time, because they could.

And in east Berlin, people would start squatting : all the houses belonged to the government up to now. People would break in. There would be someone’s dinner still there on the table from when the wall came down, and then they were just gone, just in case they’d put the wall back up. And also they were like « I don’t want any of that stuff ». So it was a very long transitional period, which is still happening, and you know Berlin is not really Germany, in the way that London is not really England. So I don’t know the direction it’s going, also because I don’t know the place of cities in the world now : New-York is getting cheaper because no one wants to live there now, maybe the same thing is happening with London, loads of people moved out because of the pandemic and they don’t want to go back…

In terms of what happened when the wall came down, I was with east-german friends of mine that autumn, and no one expected the state to crumble. Tianamen square had just happened, it did seem possible without there being an absolute bloodbath, so when it did happen, I was a little bit like – well I was back in London by then – and yeah I quite enjoyed my time travelling around in eastern Europe and I realised this is all gonna change now. The idea of trying to run half of the world under a different economic system, I mean it seems insane now – China is capitalist right ? (sight).

Brussels born music enthusiast and DJ, who lived in Berlin during the last 7 years and recently moved close to Toulouse (FR).