What originated in 2011 as a jamming collective residing in the White Cat bar (Ghent, BE), has grown into a full-fledged band. STUFF. launches its first album on March 15 and with the prospect of a lot of festival performances, the summer is bound to be a busy one.

Aäron Vanmaele, reporter at Chase, talked to the band about the album, the White Cat, and what the future holds for them.

Aäron: One week ahead of your album release, what’s on the agenda?
Dries Laheye: At the moment we are mostly reworking the songs on the album into live versions. The songs on the album originated from live performances but were then recorded in the studio and right now we’ll be refixing them for a live setting.
Lander Gyselink: There is even a song that turned out completely different from the album version. That is necessary. If we have to play those songs twenty times this summer, it will be fun to play versions composed for that live setting. 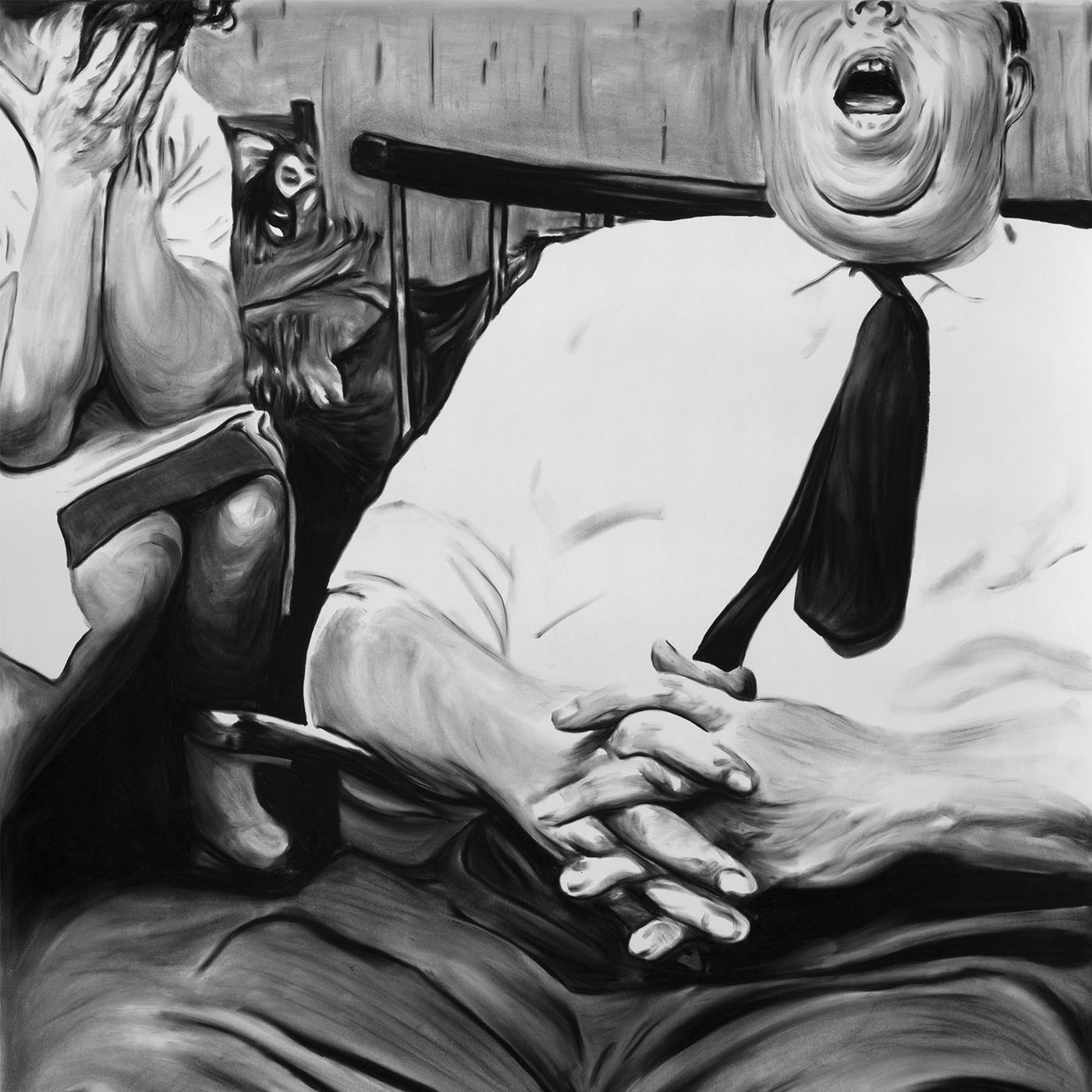 Aäron: For the artwork of your debut (see above), you managed to work with Rinus Van de Velde. How did that collaboration came about?
Lander : In 2013 we released an Ep called ‘Daiquiri’. It was available on our Bandcamp page as a “pay what you want” deal so most people ended up downloading it free of charge. After two years I got an e-mail saying someone had paid 10 euros for our EP and it turned out to be none other than Rinus. I immediately sent him a thank you e-mail, because paying for your music is uncommon these days. Apparently he is a good friend of our manager’s and that’s how we got the idea of using one of his pieces for the artwork. Afterwards we met up with him in his studio and it became clear we’re on the same page regarding art and music. We were looking around and stumbled upon some old drawings we liked a lot and we chose one from those.

Aäron: Daddy Kev, from the renowned record label Brainfeeder, mastered your LP. How did you end up with him?
Lander: We had a list of people we thought were right for the job. There was not a lot of room for adjustments. We knew exactly how the record should sound but we were missing the finishing touch. We figured Daddy Kev would be the best call because we appreciate his work and he is the man behind the party concept Low End Theory and distributor of FlyLo’s Brainfeeder. He turned out to be easy to contact so we just e-mailed him and he was up for it.

Aäron: You wouldn’t turn down a record deal with Brainfeeder?
Dries: Such an offer we definitely would not refuse.
Lander: The first boys band on Brainfeeder, why not? (laughs)

Aäron: STUFF. originated in the White Cat in 2011. Do you still go and jam there?
Dries: In the early days we played there every first Thursday of the month as a jamming collective, but nowadays we do that less frequently. At the moment we are mostly focused on club tours and festivals. Sometimes we do go back there. Last time we performed that the place was overflowing and that felt really good. There is a unique atmosphere in the White Cat and it almost feels like home to us.
Lander: That is where we thrive and go full out. During those jam sessions we go all the way. Everything is possible and everything is allowed.

Aäron: How did you evolve as a band in the four years you’ve been around?
Lander: As we were saying earlier we started out jamming in the White Cat. At the time we mostly used hip hop tracks and music from the 80s and 90s that we liked, to improvise during our sessions. For a period of two years we collected a vast amount of different types of music and rhythms. Afterwards we performed with Georgia Anne Mulrow at Brosella and we decided to work on our own material. We evolved from a jamming collective into a proper band with our own repertoire. Last year we recorded our debut and learned a lot from that. The energy we bring to our live performances had to be injected into an album. We believe we managed to do that.

Aäron: You have been working on the record for a long time.
Dries: True story, but that has to do with our schedules. All of us are involved in other musical projects so that makes it harder to gather everyone.
Joris Caluwaerts: In the early stages we didn’t really know how the record should sound yet. It really was quite a search to find out what a STUFF.-album was. This is the result of those efforts and we have learned a lot in the process.
Lander: We recorded fourteen songs in two days, put those aside and had another listen after a while to see if we could find a storyline in those songs.
Dries: There is a possibility the next record will be completely different. It is mostly a matter of learning from experience. The album is a snapshot of that time. The songs have been altered already. Our music is continuously changing.

I can imagine it being lots of fun to collaborate with a choir for example.

Aäron: Would you ever consider working with a rapper or vocalist in the footsteps of MF Doom’s Robert Glasper Experiment?
Mixmonster Menno: When we started jamming in the White Cat we collaborated with rapper Shockproof from Mechelen. After that we performed with Typhoon as well.
Dries: As long as it stimulates and interests us we are open to every project.
Lander: If we were to do such a project it wouldn’t be with an obvious artist. The most important thing for a collaboration is that it upgrades your music. If someone like Earl Sweatshirt would come knocking on our door for a project we wouldn’t say no. I can imagine it being lots of fun to collaborate with a choir for example.

Aäron: Has it ever crossed your minds to drop all your other musical projects and go all the way for STUFF.?
Dries: No. It’s just a matter of time management really and it contributes to what STUFF. is today. Every member brings different influences from their different projects to STUFF. I think we all need that and besides, it’s in our nature to manifest musical schizophrenia.

Aäron: Where do you see STUFF. in five years?
Menno: In 2020. (laughs)
Dries: Hopefully on the billboard of a nice international club tour, 10 more records made and many projects in the pipeline.

STUFF.’s debut album will be available in shops from March 15.

This article is a collaboration with Chase – the online platform promoting the Flemish urban scene.