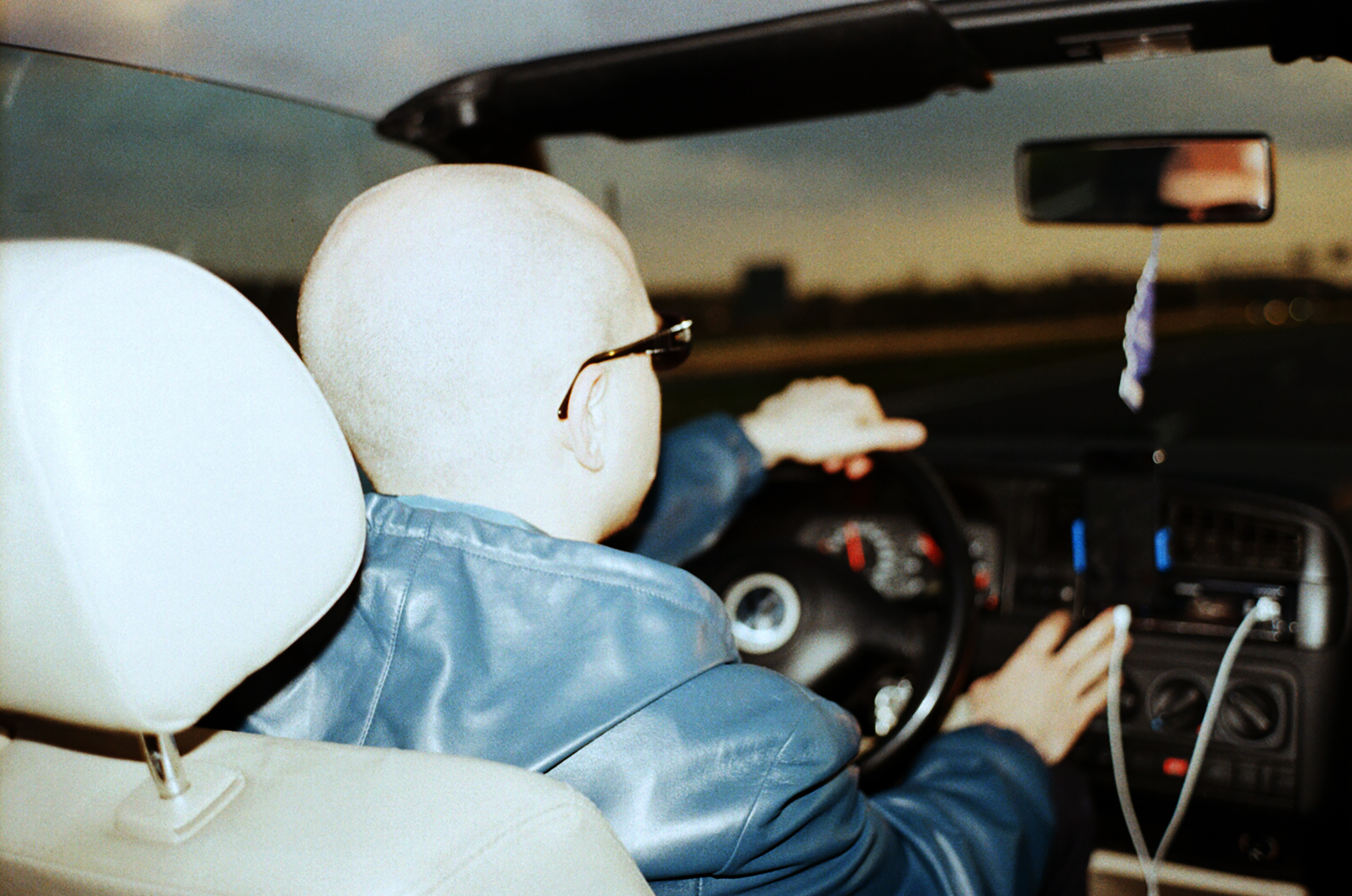 During the summer of 2013, I went to photography festival “Les Rencontres d’Arles” with a few friends. We drove to the south of France in a van, listening to Wiley’s album, “Playtime is Over” on repeat. We drank Ricard next to the swimming pool. Visiting exhibitions namely Wolfgang Tillmans and Viviane Sassen. There were a lot of parties. A lot of laughs. That’s when I met Bob.

Bob Jeusette is a film director and photographer based in Brussels. He works on fashion, advertising and editorial subjects, within both film and print. We call each other regularly to catch up, share our latest discoveries and discuss new budding projects. 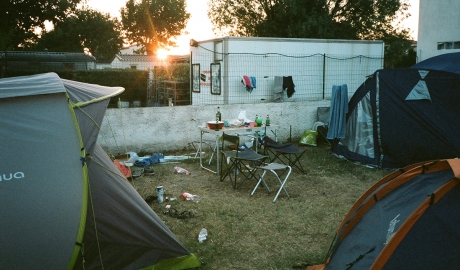 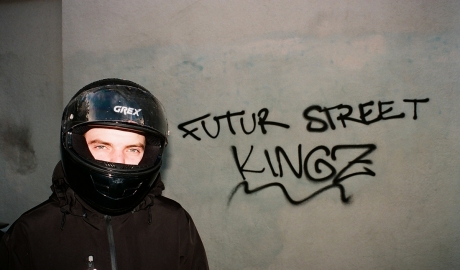 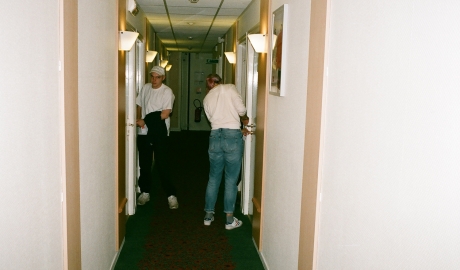 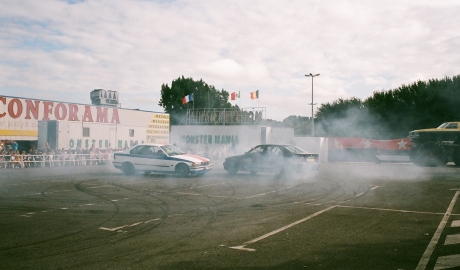 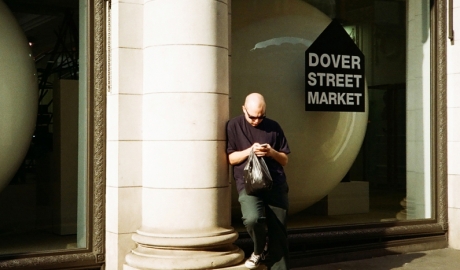 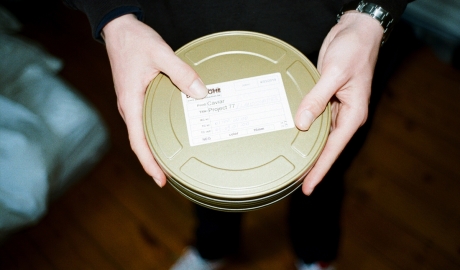 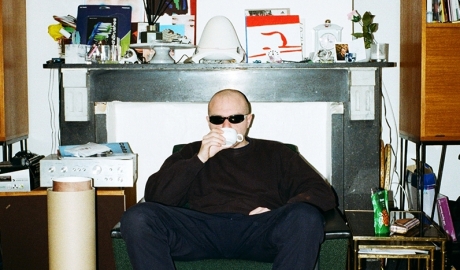 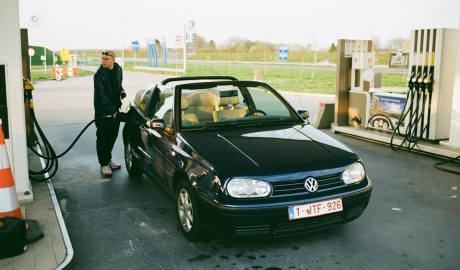 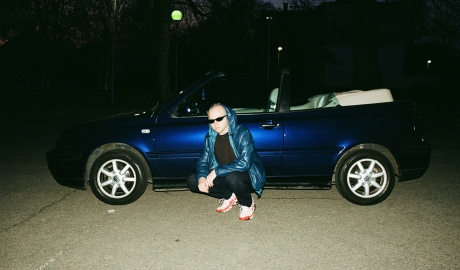 In 2016, I was working on a series for the Word Magazine. I was following 3 families of car stuntmen. During this time, Bob was looking for ideas/concepts for SG Lewis’ music video, ‘Meant to be’. This was the perfect opportunity to collaborate. We spent two days in Saint-Pol-sur-Mer (France) with his crew to shoot the Monster Mania show.

Recently, Bob has directed a music video, titled “Lunetz” for Belgian hip hop group, Le 77. During a road trip to the Designer Outlet in Roermond, I asked him a few questions about his work, his love for music videos and how he approached shooting for le 77.

– What brought you to the world of photography and film? How did you fall into this?

Watching MTV’s music videos on Wednesday afternoon at my grandparent’s home when I was 6. I remember I didn’t have the TV channels at my parents’ house, so all week I couldn’t wait for Wednesday, the day I would finally be able to sit in front of the TV and switch between MTV and MCM, all the afternoon till someone just took the remote out of my hands by force, obligating me to go outside to bike or play rugby.

The music videos were so fucking creative at that time, it was mostly the same ten that were aired over and over.One of the first music videos I remember was, ‘Pretty Fly (For a White Guy), by ‘Offspring’. I was definitely hallucinating in front of that tv screen. I was discovering the most US mainstream culture, the styles, the unjustified camera angles, the most basic & shitty narrative, but as a 6 years old kid, it made me dream.

The following video was Daft Punk’s ‘Around The World’ by Michel Gondry. This one was super edgy and creative. Weird sequences within the choreography were sped up and everyone looked like fucking psycho’s. I couldn’t understand the lyrics as I only understood French at the time, so only melody and images were speaking to me, but it was more than enough.

Later there was Britney Spears’ ‘Baby One More Time’ and Eminem’s ‘Slim Shady’. When my grandpa was walking past the living-room I would switch the channel to a more regional one, one that was more acceptable for a 6 years old kid, with cartoons or something. Mostly because I felt a bit ashamed of being caught watching Christina Aguilera’s body, close up on TV. But in my mind, I was only looking at the way the shots were made, the colors, the clothes, etc…

– How did you go from working in a camera store to directing international shoots and campaigns? Can you tell us about this transition?

I’ve already hated school. I quickly wanted to work. Around 14/15 I decided to start a professional school where you had two days of school and 4 days working in a company as an intern. I didn’t really have the choice as I had been kicked out from the traditional schools after failing to pass to the next class twice. At the professional school, the only option that was kind of interesting me was sales.

I had hard times finding a shop that would accept me as an intern. I went to libraries, supermarkets, cosmetic stores… Until the moment I found this camera store. I met the boss and he gave me my chance. The store was working super well at that time, they were breaking the prices on professional cameras, so the shop was always full of customers. Working there meant I had to learn how photography worked to be able to sell those cameras, right on the spot in the store. It was the moment where the D90 and 5D mark II were just out on the market. Two new DSLR that were carrying a video option for the first time.

At first, for the professionals it was just a gadget. Nobody was really thinking it was a thing. But for me, during the weekend I was borrowing those cameras from the store, and filming my friends, making rap videos, short films and graffiti videos. After two years at the store, without really knowing it, I had created a solid portfolio with a real identity by following my friends doing dumb shit.

Around 17 I decided to move from the store, buy myself one of those cameras and start shooting my projects full time. Of course, at that time it wasn’t paying. Next to that I had part-time shitty jobs, like putting letters in envelopes, filling plastics bags with ice etc. to get money to buy new cameras, lens and films.

My parents were really supportive but at 18 I wanted to be independent and they were not against that idea. With a bit of luck, I found an ad from an advertising agency that was looking for an intern film editor. I got a meeting with the creative director, I showed her my projects, she liked them. But didn’t get any news. About three months after, my phone rings and out of nowhere, it’s them! They were in a hurry and needed to shoot that commercial, and they have no money. I shot it, started collaborating with them on a regular basis and got hired. At that time, that company was super creative, it was grouping weirdos just like me. We were of course doing some super classic or boring projects, but others were super edgy and alien. It was an interesting period for advertising in general too. I quickly managed to make a place for myself inside the company. I was included in creative discussions and soon became indispensable. Around 21 I started to get requests from other agencies and productions company who wanted to collaborate because of the contacts I made via the agency I was working at. So, I decided to become freelance and started to shoot a bit everywhere.

– What is the job you’ve done that you’re most proud of?

In fact I don’t have a favorite job I ever did. Let’s say, the jobs I love the most are the ones where I have carte blanche. But what I love especially about jobs is having fun on set, meeting new peoples, discovering places, collaborating, being inspired and putting that energy and money into my own personal projects.

– What are your artistic influences?

I would say friends are my influences, artists or not, my relationships, travels and shit. My best friend Félix G, Cecilia, you, Tom, Margot, Patrick, etc..

– You haven’t done a Belgian rap music video for 10 years. Why?

I started directing by doing rap videos, but I quickly wanted to experiment other formats and subjects. I always think you come back to what you were doing first, one time or another. Also, for 10 years I wasn’t into the Belgian rap music in general.

Félix (Fele-Flingue) one of the band’s rappers is an old friend. We know each-other from a group of friend we had in common when we were 14, he wasn’t doing music yet. We kind of lost touch for a while, but we were often bumping into each-other, we always got along. We share the same references and have the same type of sensibility. Recently, I bumped into him randomly in the street and he made a proposition to collaborate on a music video for his band. They didn’t have that much money, but for me they had a strong identity, were talented and original. I wanted to collaborate with them.

– What was your experience like, shooting the music video?

At the pre-production, my DOP cancelled at the last moment because he was booked on this shoot in Dubai, the stylist wasn’t available. It was a bit chaotic and there was this moment right before the shoot where I was like; ok, now I have to choose. Either I cancel this or I’m going for it in full warrior mode and doing everything myself.

I choose to go for warrior mode. I did the styling myself, ordering everything from Amazon Prime, to be able to return them after the shoot. I collaborated with my mom (who’s a costume designer) to create the blue plastic bubble suits, did the photography by myself…

The shoot itself went super well! From experience, I always expect music artist to be late, hungover, etc… But Le 77 was super pro. They were challenging me all the time on the script and the edit which was cool.

The video was completely shot on 16mm. It’s completely unjustified but I was like fuck it, let’s try those shitty vfx on 16mm just to see how it looks.

But mostly, it was a nod to the MTV music videos. In general, Le 77’s music video is directly inspired from the music videos I was watching when 6-7 on my grandparent’s couch. The video nods to the world of Gondry or Jonze. That’s my intention. I wanted to create a trip in that vibe while combining my own style. And it was working well with 77’s look and feel.

– What are your future projects?

– What are you listening to at the moment?

It’s a song by Yachty made for Kerwin Frost. It’s this guy who interviews artists. At the end of each interviews he’s often asking the artist to make a song for him. I think it’s dope. Also, Yachty on Coldplay’s piano. It makes me super emotional with how beautiful it sounds.