At the end of February 2020, I finally decided to read “Congo: The Epic History of a People“, by David Reybrouck – an historical essay that tells the story of the Democratic Republic of Congo through interviews with Congolese men and women. I was already familiar with Thierry Michel’s documentaries (“Mobutu, Roi du Zaïre“, “Katanga Business”, … ) and Colette Braeckman’s articles, but reading this book is a different matter – and leaves me stunned by the extent of what this immense country has gone through. However, the aim is not to evoke it here, that would be presumptuous.

I’ve been interested in the Congolese music scene for about 10 years now. I’ve been listening to Rumba, Soukous and other older movements of course. More recently, I’ve discovered new sounds via “Congotronics” and the work done by Crammed Discs, the English label BBE and its re-releases from the Tabansi studio, Editions Veve International, sites or blogs like Panafricanmusic, Afrisson and Afropop Worldwide, Radio Nova, Syrphe (and its database that you absolutely have to check out)… Compiling 60 years of Congolese music for LDBK was therefore an opportunity to dig even deeper.

(tracklist at the bottom if this page)

– May I ask you to introduce yourself ?

I am Baudouin Mouanda, Congolese photographer, co-founder of the Congolese Photographer Collective, Generation Elili. I live and work in Brazzaville. I am among others the founder of the ClassPro-Culture project, which aims at creating links in urban areas through visual arts, exhibitions, trainings, film screenings, children’s stories, theatre, and reading – often for those who can’t visit the centre’s libraries.

– How did you become a photographer ?

The year I was 13 was not a happy time for me, as for many children at the time: the country was in civil war, I was not going to school, I was not seeing my classmates anymore. My father, a physics and chemistry teacher, had a camera: the Russian Zenit 11. He would use it to help his students to better understand light and the role of lenses. I, who was not their age, shyly watched from behind the door my father’s classes. That’s how I learned that you could burn leaves with a magnifying glass in the sun at zenith. That’s how my path crossed that of photography.

My father, while observing me, made this proposal: if you pass your high school entrance exam, you will get a gift. I was thinking of that unique camera. I worked hard to get my primary school certificate so I could go to high school – after two years without going to school. The exam passed, I received the camera. My father explained to me how a diaphragm works: “the smaller the aperture, the bigger it is. It’s like your eyes in a dark room. The less light there is, the more you open your eyes.” His advice helped me to progress and develop my passion.

– I picked a photo from “Les héritières de Mohamed Ali” series to illustrate my musical selection. Can you tell me more about it?

The series “The Heiresses of Mohamed Ali”, is a project that came a little by chance, during a trip to Kinshasa, in the Democratic Republic of Congo. I discovered these young boxers who come to train near the 20 May stadium. It could be seen as a legacy of the legendary boxer Mohamed Ali, a reminder of his fight in this stadium. And given the atmosphere around it, I was surprised to see young girls with real punching power knocking boys down. That led me to the question of women’s emancipation…

– Can you explain your approach and tell us about some of your other series?

After completing my law studies in Brazzaville, I received a scholarship from Egide thanks to the French Embassy in Congo-Brazzaville. It allowed me to study photojournalism at the CFPJ in Paris, and at 75 – Ecole Supérieure des Arts de l’Image – in Brussels in 2007. These two practices of photography were essential for me, allowing me to realize that it was possible to approach a subject differently, to see it in many ways.

For example, those true stories, lived or that some people may have observed, but that others are unaware of. It is also the photographer’s duty to say “we’ve had enough” through the lens, sometimes treating subjects in a slightly offbeat way. 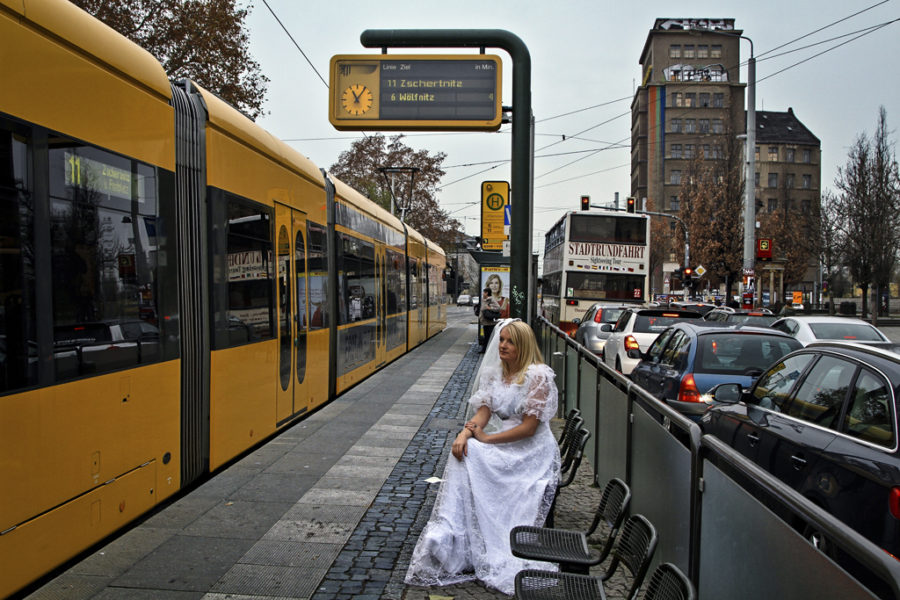 Sometimes I use photography to share an opinion with the public. The series “Le Rêve du mariage” – which I do not stigmatize – is not meant to say that real marriage does not exist. Except that today, going from being single to being married has become a kind of malicious transaction, full of innuendoes, a form of expatriation sometimes, because some people get married not out of love but because they want to leave one country for another. Others marry to escape loneliness and get married to avoid the scrutiny of others. In this series, with the wedding dress passing from one body to another, from one dream to another, I just want to show this facet of marriage, which many would prefer to see hidden, lest it reveal secret arrangements. Here, it serves as a thread making my subjects pose in places that are not appropriate in this context, such as a rubbish dump… which represents disorder over time, or even refers to divorce, to “getting rid of” someone.

“Les fantômes des corniches” is a series that denounces the lack of access to energy & electricity – forcing young students to revise their lessons in the street. It tells the story of our African brothers who are ready to leave their country because they lack electricity, wanting to go to the “cities of light” – thinking that at least there, this energy brings employment. And at the same time, it is synonymous with concern for young entrepreneurs who, once they have completed their training abroad, would like to return to their home countries to create jobs. People sing that we have the Congo River, which is a gift from God, but our leaders find their interest elsewhere. And so, in order not to despair, there are movements like “SAPE” (Société des Ambianceurs et des Personnes Elégantes) which brings smiles and hopes through colourful clothes. 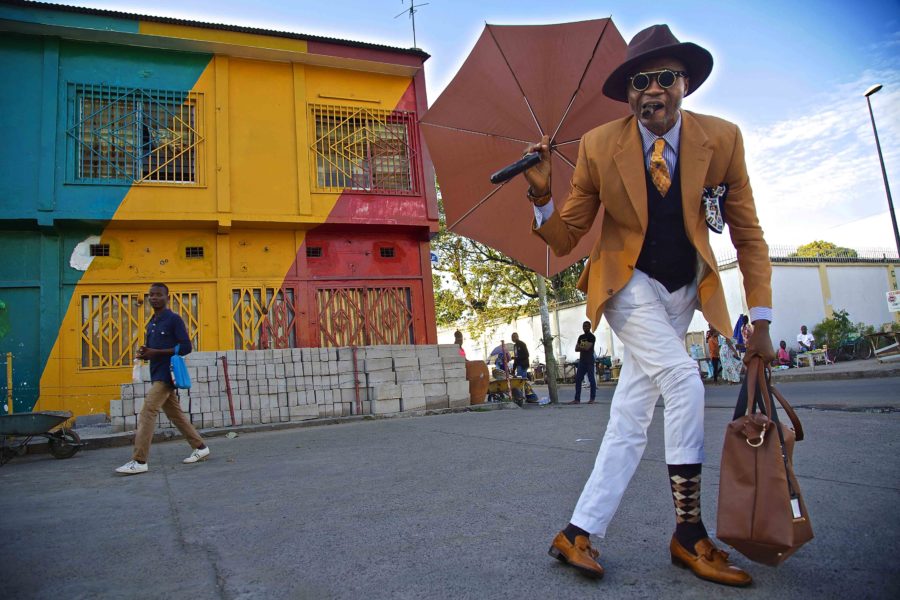 – Via Afrique In Visu, I came across the series “Hip Hop & Society,” a series which made me discover your work. Among the people photographed, there are notably unemployed students who wish to testify of their existence, through hip-hop. Do you have any news about the people you photographed 10 years ago?

I have been a member of “Afrique In Visu (the platform of African photography) since 2007. It is a beautiful encounter.  Above all, its objectives go in the same direction as my photographic vision.

With the project “Hip Hop & Society”, I wanted to show these very committed young people who shout out of luck through their texts, because they want to see things move forward. Ten years later, that’s a lot of years, a lot of memories. Today, many of them live abroad, some of them still develop their passion for writing. One of them even became a journalist in a daily newspaper in Brazzaville. Others are poets while some are working as civil servants. 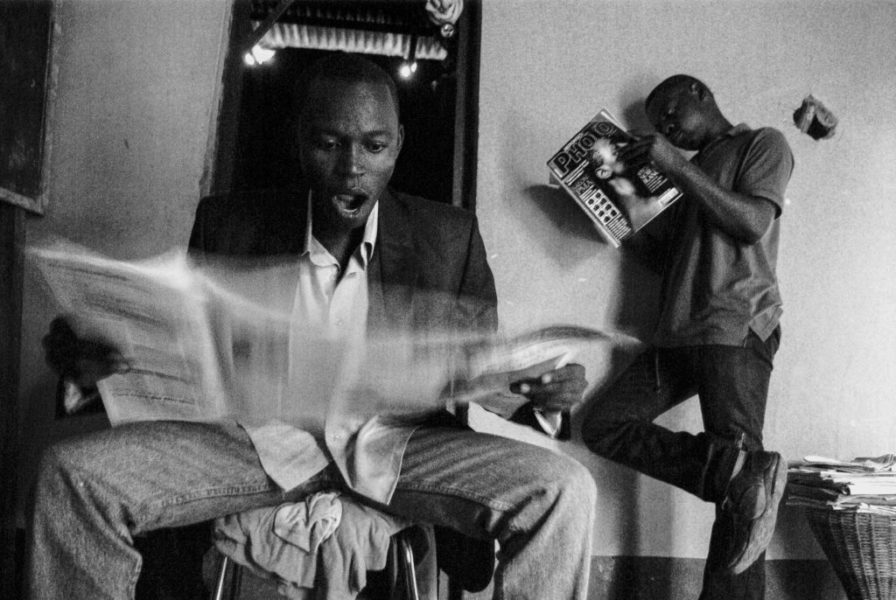 Ten years ago, many African countries celebrated half a century of independence. Huge budgets were allocated. Some saw it as the beginning of a new era in terms of democracy. But, generally speaking, the system has not changed. The same officials are still in power 10 years later. I do not see any changes. So I just see it as a reminder that 60 years ago my country gained its independence. And for the next 60 years, I wish my country good health. Talking about the national holiday, I hope that everyone will smile to show that the country’s history has changed.

– What are your future plans?

At the moment, all the cultural activities I was supposed to take part in are suspended: the Strasbourg Photography Salon, the Festival de l’œil Urbain. The Deauville photographic research residency to which I was invited is postponed to a later date. This allows me to work on a new project, “Le ciel de saison“, about the bad weather that Africa has been experiencing in recent years due to climate change. 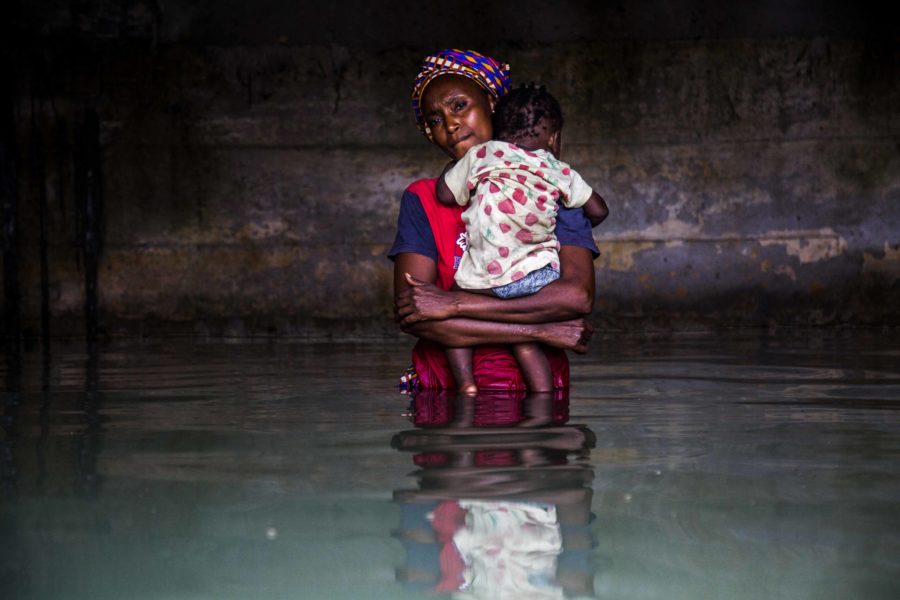 Brussels born music enthusiast and DJ, who lived in Berlin during the last 7 years and recently moved close to Toulouse (FR).